And what have I been saying for years now? 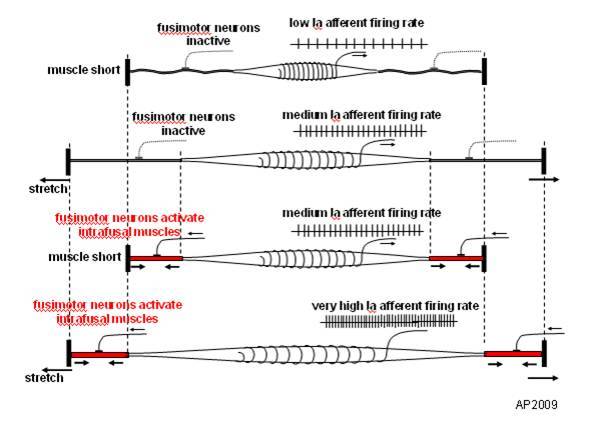 Connected to the nervous system by large diameter afferent (sensory) fibers, muscle spindles are classically thought of as sentinels that appraise the nervous system of vital information like length and rate of change of length of muscle fibers, so that information can be sent to the cerebellum and coordinated with other higher centers in the central nervous system.  They act like volume controls for muscle sensitivity. Turn them up and the muscle becomes more sensitive to ANY input, especially stretch (so they become touchy…maybe like you get if you are hungry and tired and someone asks you to do something); turn them down and they become less or unresponsive.

Their excitability is governed by the sum total (excitatory and inhibitory) of all neurons (like interneuron’s) acting on them (their cell bodies reside in the anterior horn of the spinal cord).

Along with with Golgi tendon organs (which monitor tension) and joint mechanoreceptors (types 1-4), they also act as proprioceptive sentinels, telling us where our body parts are in space. Here are a few papers that talk about this, identifying several proteins responsible for neurotransduction including the Piezo2 channel as a candidate for the principal mechanotransduction channel. Many neuromuscular diseases are accompanied by impaired  muscle spindle function, causing a decline of motor performance and coordination. This is yet another key finding in the kinesthetic system and its workings.

Now, think about how needling effects the muscle spindles and GTO's like I wrote about here and here. Remember that, generally speaking, needling the origin/insertion of a muscle has a tendency to strengthen it and needling the belly has a tendency to relax it. Try to incorporate some of these principles with the next patient orr client that you see.

Also be sure to include proprioceptive exercises and drills (on flat planar surfaces, which we have talked about in other posts, see here) in your muscle rehab programs.